You’re written a book. A play. A short story. You worked hard and put the hours in, and now you are going to publish it! And what do you do first?

No! No, anything but that don’t—

You did it. You ruined it.

You used Comic Sans on the cover. Or the promo. Or your header. Or anywhere ever.

FOR THE LOVE OF ALL THAT’S HOLY, DON’T USE COMIC SANS.

I know why you want to. You don’t know much about fonts. You’re a dentist moonlighting as an author, for god’s sake, not an artist! When you look at Comic Sans, you see a font with cute little squiggles and rounded lowercase letters. It looks kind, soft, a little like a child’s handwriting. It seems personalized, and so friendly you just can’t resist it! 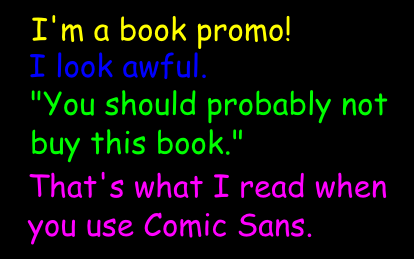 Comic Sans was a font created for one purpose, and one purpose only: for use in comic strips. Hence, comic. It also does not have serifs—it is sans serifs. There you go, Comic Sans.

It is also the ugliest, most unprofessional, sloppy, and stupid-looking font in the world. Shut up, shut up, yes it is.

And worse than that? It shows that you did absolutely no research.

No, you didn’t. Because when I google “good fonts to use on a book cover” I get a lot of conflicting answers, but when I google “bad fonts to use on a book cover” the consensus is clear. Because there are a lot of fonts with relative merits, but there’s only a handful we can all agree to hate. And if you had researched book covers, you would have seen at least one, but probably more like eleven.

Think of it this way. Have you ever read “If You Give A Mouse A Cookie?” Yes, of course you did, you’ve encountered someone under the age of five at some point in your life. In fact, you can probably recite the opening line here and now: “If you give a mouse a cookie, he’ll want a glass of milk to go with it” (or something like that.)

I’ve rewritten it for fonts:

I’ll tell you now, this new version of the beloved children’s book, much like the first one, doesn’t have a happy ending. Mostly because this version ends when I spot the Comic Sans and don’t click the book.

There was a time, ten years ago or more, where Comic Sans was an acceptable choice for an average person. As a society, we weren’t nearly so font-savvy, so computer-friendly. We accepted a more homemade look. We thought, “Gosh, this person might not be an expert at cover or promo making, but I bet the inside will be fine!.”

That is no longer the case. In fact, the only acceptable use I can see for Comic Sans is if you purposely wanted to drive people away from whatever product you’re advertising.

If you enjoyed this rant on Comic Sans, check out the next in the fonts series with Papyrus: Looking Awful Since 332 B.C.

7 thoughts on “Comic Sans: The Font That Just Needs to Die”

Tell us your thoughts! Cancel reply